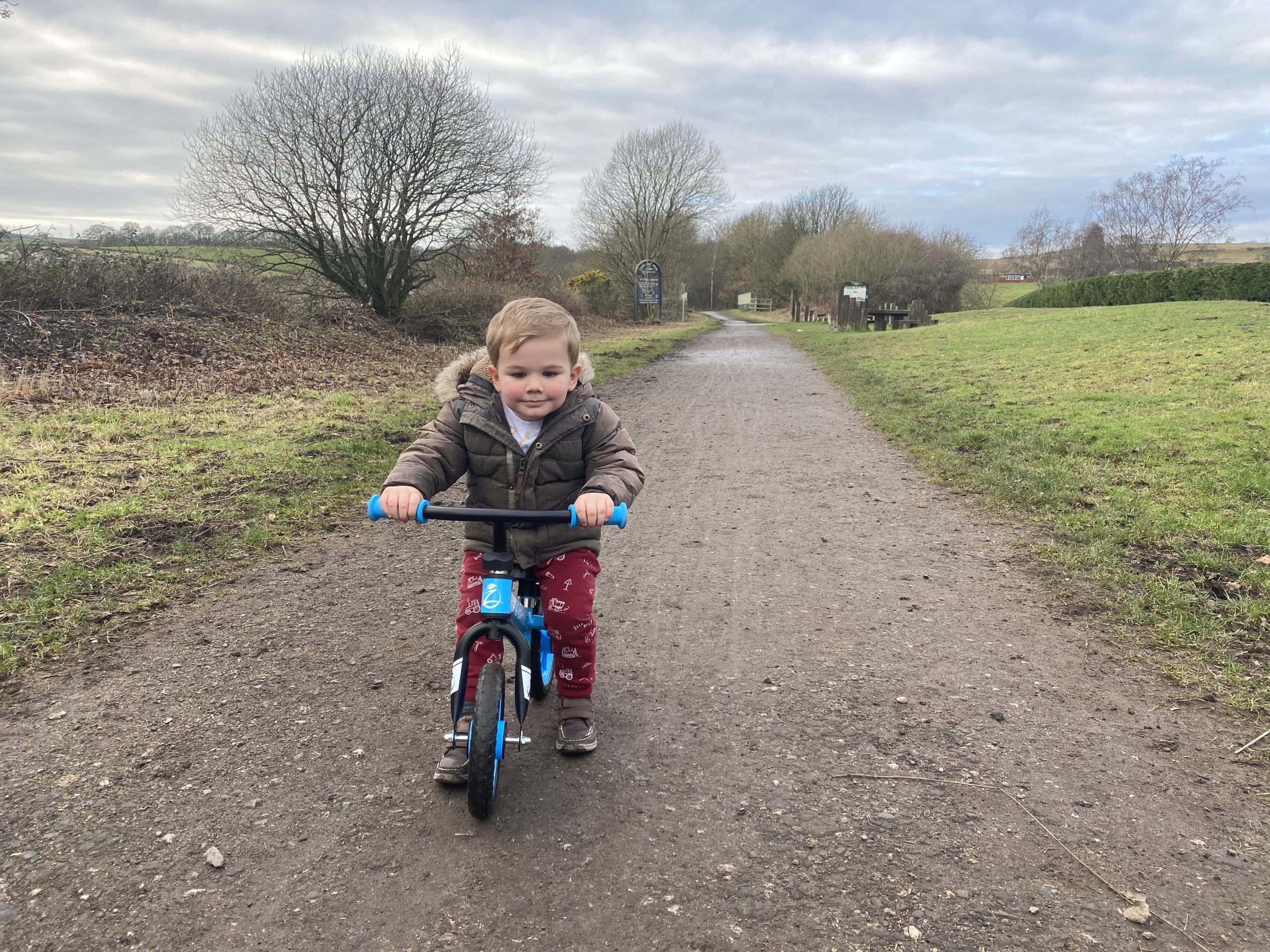 Recently Sam and I have been enjoying some winter walks along the Trans Pennine Trail. Sam (2 1/2) is going through a difficult stage right now. Over Christmas he transitioned into a big boy bed – which for some reason he calls a “bad boy bed” and now refuses to sleep. He went from a 2 hour afternoon nap and 7 o’clock bedtime to no afternoon nap and a 9 o’clock bedtime and lots of getting up. It’s awful. I would happily put him back into the cot for a good night’s sleep but unfortunately after surviving all 5 of my children, the cot is completely dead and we had no choice but to throw it out. So, anyway, I find that I have to wear Sam out during the day – no matter what the weather – in order to get our peaceful evenings back.

The Trans Pennine Trail was once a railway, and is now a 207 mile path in the North of England that runs from Southport on the west coast, across the peaks, and all the way to Hornsea in the East. We have explored only about 20 miles of the trail so far, but today I only want to talk about our little section of the Upper Don Trail in Thurgoland.

We can access the trail at Old Mill Lane. If we head North West on the trail it takes us over the Romtickle Viaduct towards Oxspring and Penistone. South East takes us through Thurgoland Tunnel towards Wortley.

We first discovered the trail at Easter last year, after we had the offer accepted on our house. We were visiting my Mum in Penistone and we walked from Cheese Bottom (near Oxspring) to Thurgoland. This took us over the viaduct but we had no knowledge of the area so we didn’t know that we were crossing over the viaduct. The trail is very long and straight as you can see from the pictures, there’s often not a lot to see from the trail itself. Now it’s winter we have better views beyond the trees, although the greenery in the summer is beautiful too.

The Thurgoland Tunnel is 282m long. I don’t know how many hours it is lit during the day, but it has been the few times we have been through there. The first time we went through the tunnel we were all on bikes, which worked out well because I was a little scared and it was good to get through quickly. I’m less scared now, I realised that as soon as the entrance to the tunnel disappears, the exit becomes visible. Makes me feel safer knowing that I can see the way out! I would probably never go through on my own though.

When we go through the tunnel with the children, they love to hear the echos so it is a very loud experience with some of the kids shouting, screaming, and whooping.

The other entrance to the trail at Thurgoland is at Cote Lane. There is a small picnic area here. This is where I took Sam earlier this week because it is easier to park at Cote Lane (it’s too far for us to walk) and I didn’t walk with Sam through the tunnel alone. He got a balance bike for Christmas, and the trail is the perfect place for him to ride it because it is straight, flat, and not too many people for him to run in to! (literally, sometimes I think he even aims for them).

We had a lovely walk, we passed a cute puppy who was scared of Sam on his bike (smart dog). We stopped to say hello to a horse and its rider, but there were also several cyclists and runners using the trail too. Sam is so confident on his bike already and it hasn’t even been a month! We went 1km along the trail and then back again.

When we returned to the car I looked at Spring Row cottages on Cote Lane, where my 3rd great-grandfather lived (according to the 1861 census). There is a plaque on the front of the cottage that says “J Burkinshaw MDCCCLV’. Because I am still researching my family history in Thurgoland, when I got home I put that name and date into google. I found this image on a railway website of that exact same junction where Sam’s photo was taken. Spring Row cottages are in houses the middle of the railway picture, but they are now hidden behind the hedges in the photo I took of Sam. The entrance to the Trans Pennine Trail off Cote Lane used to be the sidings.

My ancestors used to work at the colliery, as well as the railway, and the nearby wire mills. My little afternoon stroll with Sam and the Trans Pennine Trail has now led to some more investigations into village life at the end of the 19th century.