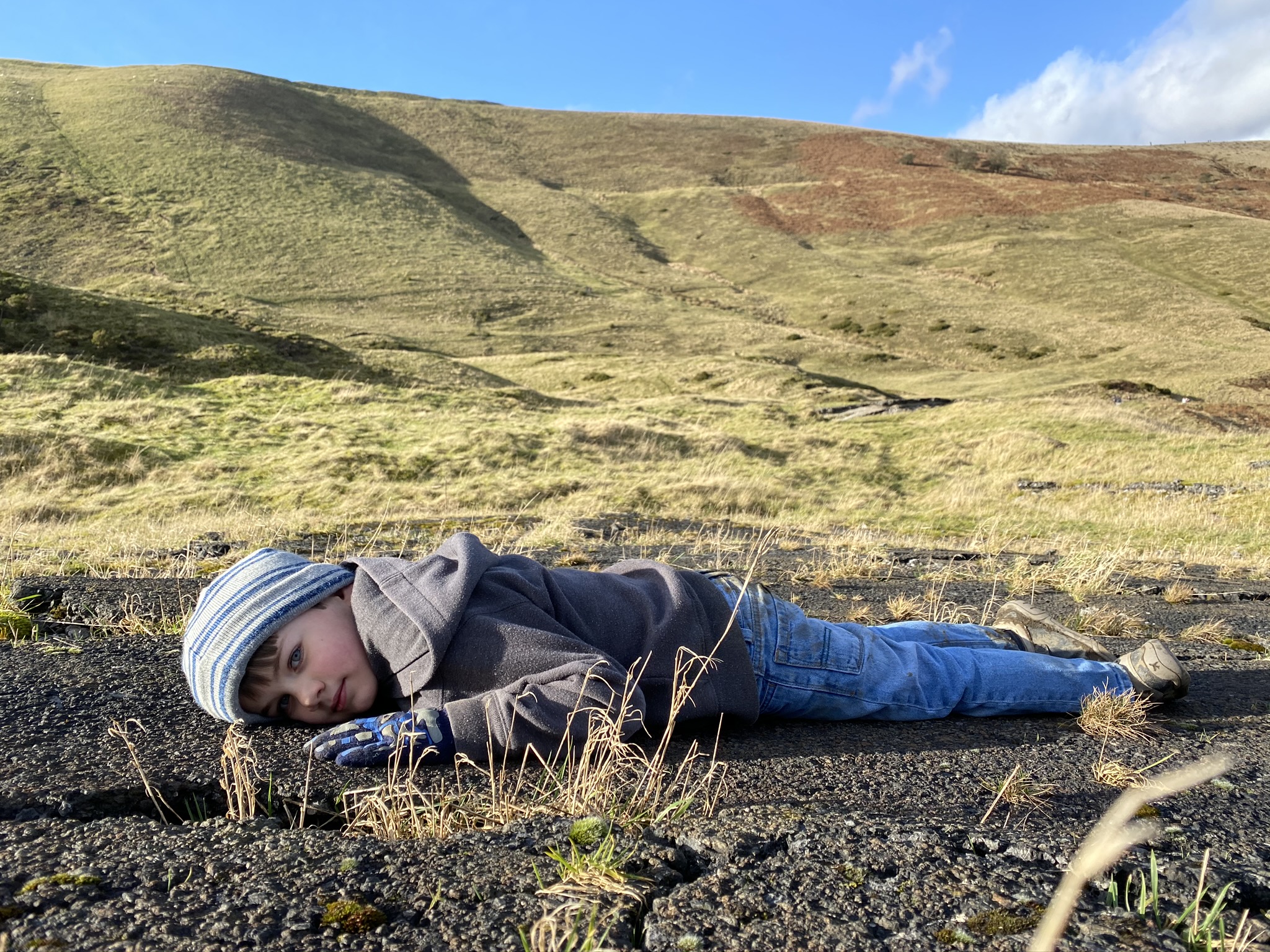 We had some lovely sunny (but cold) February weather on Saturday – the calm before Sunday’s storm Ciara with its 70mph winds. We knew we wouldn’t have long in the Peak District before the rain started, so we used the ViewRanger App to find a walk suitable for the children.

This easy route of Mam Tor Old Road Circuit looked like fun, I hadn’t heard about the old road before seeing it on the app. Apparently it’s really popular in the Peak District for walkers and cyclists. The road was destroyed years ago by a rock slide and now you can walk along it.

We parked near Blue John Cavern, which was the start and the end of the walk. The first section was along the old road which the kids absolutely loved climbing all over. I thought the walk was going to be only on the road so I did not wear sensible footwear (big mistake as usual!). There were sections where the road had fallen away completely which were muddy. Also I got stuck (and very dirty) rescuing one of the children from sliding down a pile of silt on the slippery hillside.

After the short section of road ended (I think it’s about half a mile?) we made our way onto a footpath that runs across a field. It was at this point that we started to lose our way as there were lots of different paths trodden through. Somewhere along the way we found a sheep’s skeleton! Now, I would have just walked on but apparently I have produced children who have “always wanted a skeleton”. Weirdos. So one boy carried the spine, one the skull and jaw, and one boy had what might have been a femur. They were determined that they were going to clean the bones up and keep them in their bedroom. It was nearly impossible to dissuade them and I ended up shouting like a lunatic that I wasn’t going to let it happen. From that point on I became the worst mum ever because they will never have the chance to keep a real spine in their bedroom ever again.

Luckily as we started making our way back to the road (which I thought was pedestrianised but it wasn’t), we started going up the hill and we came across a small museum and gift shop called Treak Cliff Cavern. This distracted the children from their disappointment for a while, there were also toilets there so we had a little stop. Max (6) has been making a treasure chest at home to keep all his valuable stones. By that I mean some fool’s gold that he bought at The Heights of Abraham last year. The gift shop was perfect because it was full of beautiful sparkly stones so I let him buy one to add to his small collection.

From there we made our way back up the hill. The total ascent for this walk is 466 feet but it was quite a steep climb near the end. Sam (2) managed to walk the whole way but needed help from us at different points. The whole walk was a 2 mile loop – longer than the map said because we got lost in the field. We always have the best adventures when we get lost though!