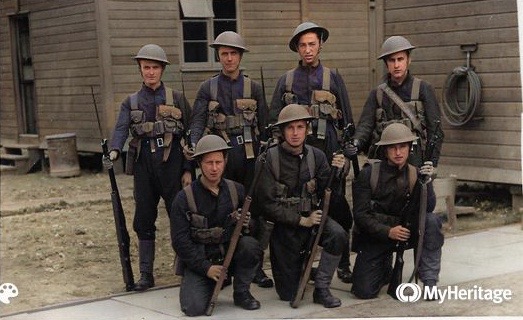 In honour of the VE day celebrations today (75 year anniversary!) I wanted to write about someone who served in WWII. All of my grandparents were too young, and my great grandfathers fought in WWI. Then I remembered that as this record is primarily for my children, Ben’s grandfather George William Richard Hopkins was in the Navy during WWII.

I don’t confess to know much of what he went through – learning about family history is an ongoing process for me. What I do know is that he was a hydraulic engineer, and he was on a ship that was part of the Russian Convoy. The purpose of this convoy was to make deliveries such as weapons and ammunition to the Soviet Union which was one of England’s allies.

These are two of his photos from that time, showing the conditions in the arctic. The journey was described by Churchill as being the “worst journey in the world”.

In addition to his medals awarded by the British government for his service, in 2014 George was awarded the Ushakov medal from Russia. He had died the year before the medals were given, so Ben and I took the children to London to collect the medals at a special ceremony at the Russian Embassy.

The Ushakov medal is awarded to sailors who have displayed courage in the course of defending Russia or its interests.

We are so proud of Grandad Hopkins, especially Ben. At the embassy Ben was interviewed by a Russian News company and had the opportunity to talk about his Grandad, and his experience collecting the medals on his behalf. I love it when people get to share their stories, and that George’s story was shared abroad. It was really special to have had this experience with the children, I hope that it’s something they always remember.

Some of the pictures in this post were ‘colorised’ by MyHeritage, which is a free feature on MyHeritage which turns black and white photos to colour. This site is affiliated with MyHeritage, which means we might earn a small commission if you click a link on this page.